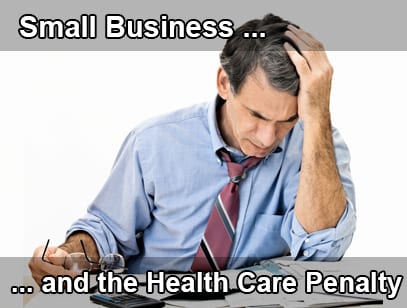 The Affordable Care Act, signed into Law March 23, 2010 by President Obama, is due to go into effect at the beginning of 2014. This law is intended to increase the rate of health insurance coverage for Americans and reduce the overall cost. Business owners, who employ more than 50 full-time workers, will be required to provide coverage for all those who desire it, or face stiff penalties of $2,000.00 for any full-time worker over the 30-employee threshold…and therein lies the rub.

Many business employers provide health insurance to some of their employees, but not all. If he were forced to do so, one businessman says he would end up paying more for the additional employees than he has made in profits in his best year! The alternative? This owner is seriously considering dropping all insurance coverage and paying the penalties, which would be equivalent to what he is now paying to insure his managerial staff.

Other business owners don’t feel they can afford to pay the penalties even though these would be less than insuring all their present employees. One proprietor in particular, a health care provider, plans to stop all insurance coverage. To avoid the penalties, he will cut his employees hours to part-time and add on additional part-time workers to insure the wellbeing of his patients.

According to Department of Health and Human Services studies, the majority of employers are not expected to drop coverage, pointing to the case of the Massachusetts state law for health care enacted in 2006. Among 400 employers with 50 workers or more, 71% of them responded to a survey saying they were not planning on dropping insurance coverage. Only 3% will opt for the penalty. One drawback of selecting penalty over healthcare is that the healthcare payments are tax deductible and the penalties are not. In a poll conducted by the Wall Street Journal, the majority of small business owners expected health care costs to increase in 2014.

A third alternative, and one which many small business owners are contemplating, is to have their employees pay a larger share of the coverage costs. This, though, could be complicated as the Affordable Care Act caps the employees’ contributions at 9.5% of their income.

Small Business Owners who are contemplating not offering health care face the possibility of losing employees to competitors that do offer this benefit. As one business owner put it,
“If we don’t offer coverage, will it be harder to hire people? That’s the unknown.”