A New Look at Credit Assessment 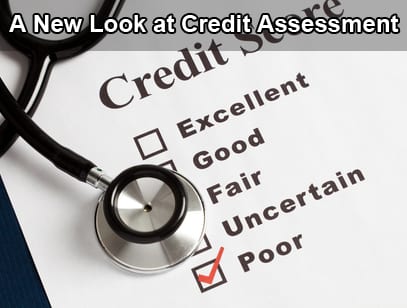 It used to be that, when you applied for a credit card, your acceptance or rejection was based on your FICO score.

For many, this has posed a major problem. Countless people were affected negatively by the sudden and rapid downturn in the economy, either by losing their job entirely or by being put on restricted hours. In families with both adults working, this could have led to an economic double whammy. People fell behind in bill payments, thus accruing a negative payment history, which has had a less-than-favorable effect on their credit score. The unfortunate aspect of this situation is that most of these affected people would, under normal circumstances, have had acceptable credit. Even more unfortunately, these same people are probably back on track with their lives, paying bills and other debts in a timely manner, but the dings to their credit will take seven years to fall off of their scores.

Before the downturn, issuers grew their businesses by offering cards to nearly anyone who’d take one. Now, after writing off billions of dollars in unpaid loans, they are trying a more novel approach. As millions of Americans recover from the sharpest downturn since the Great Depression, a growing number of credit card issuers are quietly testing new, more comprehensive ways to evaluate customers’ creditworthiness.

Card companies are using non-traditional data that they feel will give them a truer sense of the repayment capabilities of potential clients. These statistics include the value of your home, whether or not you have a criminal history, how often you change addresses and what kind of professional license you may hold. Other non-traditional information might also take into account payment history for cell phones or the applicant’s use of prepaid cards. All this information helps the card issuer develop a better idea of who the potential cardholder is, despite their credit score.

Granted, there is no guarantee that this non-traditional information also won’t be misreported, but at least it gives many more consumers a chance to re-establish credit. At the moment it does not appear that banks are basing loans on this new data, but it might not be far in the future.

If you are a small business that is still caught in that credit score limbo, and could use additional funds to expand your business, buy new equipment or even hire additional employees, contact the Underwriting Specialists at Liberty Capital Group, Inc. @