Would you trust Google with your money? Amazon? Apple Anyone? 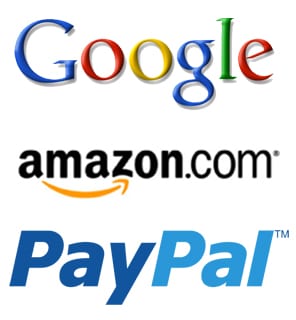 The biggest news spinning through the financial spheres of late relates to how Internet giants are entering the foray of banking services.

Departmental chain Walmart, in partnership with American Express, is now offering its own debit card called Bluebird. This as Google launches itself into the credit business, by now extending upto $10,000 lines of credit to users, to finance purchases of its online advertising, Google AdWords.

Just last month leaked screenshots of the “Google Wallet card” flooded newsfeeds, as a universal wallet set to take the place of any debit or credit card you own. In further rumors, a reported physical version of the card will also be available to replace all that plastic you now carry.

Though PayPal Inc. is keeping mum on its future plans, the online payments website ran a pilot program over the summer, offering U.K. merchants cash advances to test the market for demand.

And add Amazon onto the list of financial service providers – as the retailing giants launched its Amazon Lending program in early 2011 – that lends to its “sellers of all sizes”.
The gig is certainly up for big banks, as retailing giants realize the lucrative potential of customers who are willing to put their money where their mouse is.

With cash and cheque being phased out for plastic money, studies suggest that it will be a matter of years, when most smart phone users will be reaching for their phones and mobile wallets to make payments.

Earlier this year, a study revealed that nearly half of Apple’s customer base would be delighted to start banking with the brand – hinting that customers may be readier than critics may think.

Though they might just be testing the waters as of now, companies are slowly building their way into the world of financial services. For traditional banks, this means having to compete with rivals with a loyal user base who have had years of trusted customer service.

The likelihood of big retail brands venturing into financial services over the next few years is no longer a mere probability. But for customers, with brands like Google and Apple continually revamping the framework in which competition takes place – who knows whether they could completely alter the banking experience of the future, for the better.