According to Wikipedia, “Bankruptcy is a legal status of an insolvent person or an organisation, that is, one who cannot repay the debts they owe to creditors. In most jurisdictions bankruptcy is imposed by a court order, often initiated by the debtor”. 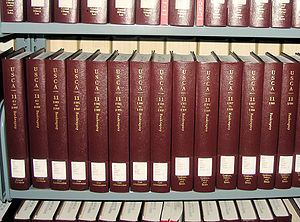 Part of Title 11 of the United States Code (the Bankruptcy Code) on a shelf at a law library in San Francisco. Photographed by user Coolcaesar on March 14, 2009. (Photo credit: Wikipedia)

Usually, when a person or company is inundated in debt, they will file for bankruptcy. There are six different types (chapters) of bankruptcy with the following being the three most prevalent:

Chapter 7: basic liquidation for individuals and businesses; also known as straight bankruptcy; it is the simplest and quickest form of bankruptcy available

Chapter 11: rehabilitation or reorganisation, used primarily by business debtors, but sometimes by individuals with substantial debts and assets; known as corporate bankruptcy, it is a form of corporate financial reorganisation which typically allows companies to continue to function while they follow debt repayment plans.

Chapter 13: rehabilitation with a payment plan for individuals with a regular source of income; enables individuals with regular income to develop a plan to repay all or part of their debts; also known as Wage Earner Bankruptcy.

Bankruptcy fraud is fairly prevalent with such bad acts as concealment of assets, destroying of documents, conflict of interest and fraudulent claims, just to name a few. All assets must be disclosed in bankruptcy schedules, as it is the creditor not the debtor who decides whether the asset has value. Unfortunately many less-than-honest filers often try and “creatively relocate” certain of their larger ones to avoid additional payments. This is a federal crime in the US but, despite that, it is a widespread problem.

The 2005 Bankruptcy Abuse Prevention and Consumer Protection Act was an outgrowth of the abuses of the bankruptcy filings prior to 2005. Many individuals and businesses availed themselves of a Chapter 7 filing thus divesting them of debt. Others filed multiple times, abusing the system. Still others used the system to hide assets and avoid payment of taxes, alimony, child support, etc.

Changes in the Bankruptcy Code enacted by the 107th Congress include:

These are some of the major additional requirements and restrictions imposed on those who wish to rid themselves of unwanted debt. The idea behind this new bankruptcy code is to make individuals and businesses alike become more responsible for debts they incur, to teach them not to relapse into this downward spiral of increasing obligation and to safeguard the rights of others who might be affected by a bankruptcy.